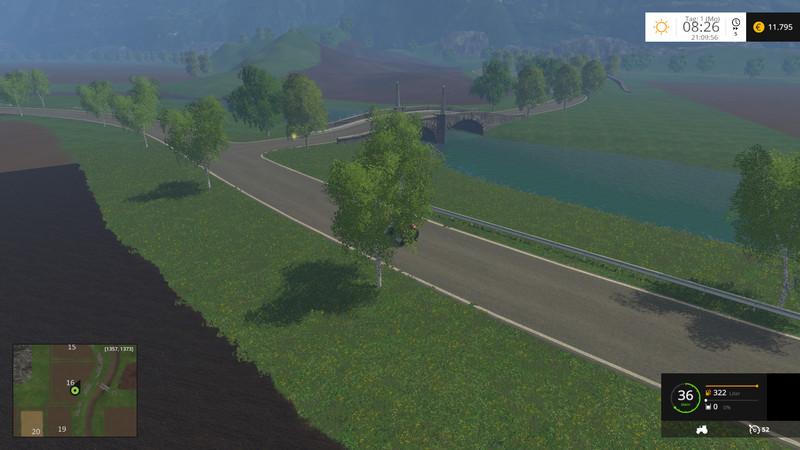 Description:
Hello and have fun on the LS11 Map.
This is the default map from the version LS11.
For the LS15 it has been converted from Deere 8530th He has given me permission to rebuild and re-uploading kindly.
Thus I was able to rebuild once, I would like to thank here all the modders, who only made possible by their building remodeling. Since I have many buildings and objects for a long time, I do not remember by whom are they all. For the reason here at all, Thanks for your work. I hope that there will be many new things and not all modders are eventually disappeared.
On the map I have some things altered, changed or deleted.
The farm has received another residential house, for the children a small petting zoo happened.
The old warehouse has been collapsed during the storm and never rebuilt. For a new large warehouse has been created next to the farm. There are also 2 Feed Mixing gekommten are added.
When driving in the camp please caution. There are inside the building no fall protection available (examiner has not noticed at the final acceptance).
Before the bearing is an open space. On this surface a Maissilo can be created right and left respectively. It is even assumed maize chaff. A Grassilo can be applied between the two silos. This only grass is assumed.
At the cow pasture and the cattle and pigs are still your traditional silos where everything ensile chopped can be unloaded. On the grounds of the mast system even stock for potatoes, beets and mixed feed are available.
In addition to the pickup point for the milk is still a small area for storage of fodder.
For statistics fans is on the farm has a weigh been installed (small gift from the agricultural machinery trade).
Storage facilities for the machine (large fleet of large machines) are in the yard 3 open shelters and 6 shelters in transit halls. But beware, the mason has looked too deeply into the bottle and thus measured. Unfortunately, the large Drescher not quite fit into the hall with attached a large cutter. The gates close then no longer. Caution also at the ramp starting on large warehouse to unload. The paving in front of it is anything but flat, so drive slowly ran.
Another service of farm equipment dealer is that the machinery and equipment to be supplied directly to the farm.
A Viehändler also arrived mitlerweile. There, the animals can be picked up and taken into their own stables. Where animals are fattened, of course, a butcher should not be missed. Unfortunately, he got no other building, like in the village, right on the roundabout.
Next built are still a BGA, a sawmill, a Heitz power plant (the sawmill), a trunk sale at the harbor at the garages, a brewery, a sugar factory and a ‘s dairy (unfortunately without me- Truck).
Special thanks I would like to be sent to old farmer, who has helped me over and over again. Without him I would probably already after 2 hours all reflected on.
The Map unfortunately I could not test the MP.
But trotztdem I wish you all a happy gaming.
Your car park at the beginning is very well equipped. This can already be started an MP round.
I hope you have all the MapAnimationTrigger with in the Mod folder. The need for the transit halls and the large warehouse.