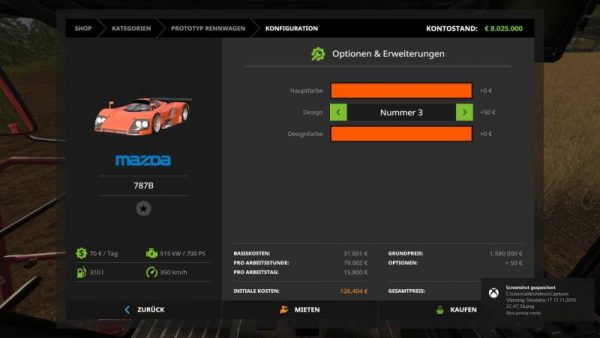 Description:
This Is A Mod From Noahfennen Enjoy The Mod.
The legendary machine that brought Mazda the first victory ever in the Le Mans for a Japanese manufacturer
Produced in 1991 as a variant of the original 787, the 787B is powered by a 4-rotor Wankel rotary engine, producing 700 HP. It weighs 2,070 lbs., and was specifically made for the Le Mans 24 Hour Endurance race. After its victory in 1991, the 787B was retired following FIA’s outlawing of rotary engines, while its other 2 derivatives continued to be used for racing purposes
DE: Das Ist Eine Modifikation Von Noahfennen. Diese Mod Ist Gut.